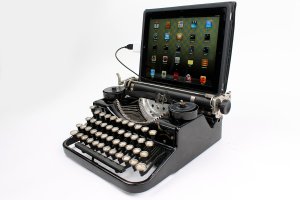 Tell us about yourself and how you got into writing:

I’m a short story author, essayist, and novelist. I’m a prior service Marine who resides in Richmond, VA, with his wife and two kids. When I’m not spending time with my family or writing, I like lifting weights, running, and choking my friends via the fine art of Brazilian Jiu Jitsu. I got into writing because I love a good story, and was audacious enough to think that I could tell a few myself.

Tell us about your stories:

Right now I’m doing final revision on my latest book, entitled Vindication. Vindication is Book 3 in my Clockwerk Thriller. As the subtitle alludes to, I consider these works to be, primarily, thrillers. But the series has strong elements of steampunk, alternative history, and science fiction as well. I like to describe it as “Vince Flynn meets Jules Verne, with a dash of Assassin’s Creed thrown in for good measure (because people love those types of commercial comparisons, don’t they?).This book is the last in a planned trilogy with Cobble Publishing. I’ve also got a completed first draft for another sci-fi novel, as well as several fully-fleshed outlines. Not to mention a slew of short stories (both published and unpublished), which I’m hoping to compile and release sometime as a collection late next year. So I guess you could say I’ve got a few irons in the fire.

What kind of success have you had?

In 2017 I scored a three book deal with a small press. So I’d definitely consider that a win. In 2018, I authored two full-length novels, and managed to get almost half a dozen short stories published. Id consider those wins. And I learned a ton of invaluable information around the business of writing (all of which I plan to implement in 2019). I consider that last one the biggest win of all.

Tell us about your influences.

There are a couple. Vince Flynn, for sure-100%. No one does thrillers like Vince did-he was the best, hands down. Stephen King, of course-simply a master storyteller. Neil Gaiman-the gold standard of the short story (and his long form fiction isn’t half bad, either). Maya Angelou, who laid her magnificent soul bare, from joyous heights to darkest depths on every single page.

Give us an insight into a time you wrote a scene with feeling.

I wrote a short story called “The Evac” (which you can read for free, right now if you like, at a website called littlebluemarble.ca). The ending was rough (emotionally speaking). The editor of that one told me that her colleague cried real tears when she read it.

Check out this book by out FEATURED AUTHOR.