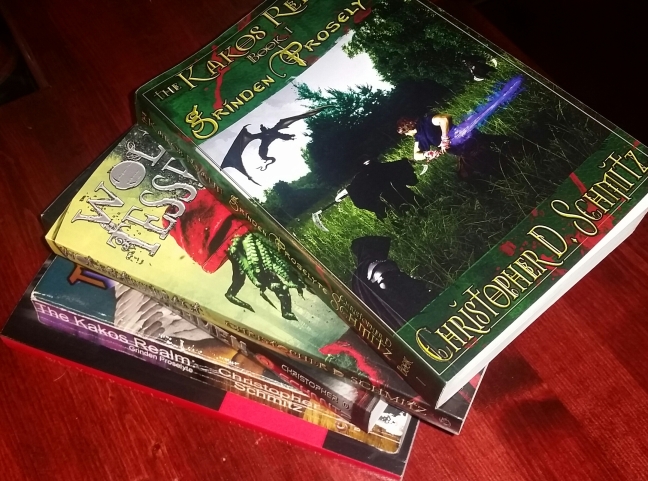 I’ve got a few new things in the works that will be coming out very soon! The Kakos Realm: Grinden Proselyte (book 1) should be coming out next week–got the edits all done over the weekend after my line editor got done with it and I had a chance to look over the galley and make some format/cover alterations. Wolf of the Tesseract is available now on ebook and should be out on audio in a couple weeks. It’s been a busy year… in the above photo, four of those five books came out this year! I’ll have completed another nonfiction book and a new novel by years end bringing my count up to 3 books this year! I also decided, after taking a new look at an old 45k word Paranormal YA book I wrote eight years ago that I might do some heavy rewriting on it–I’ve always liked the concept, so I might as well rework the subpar execution and push it out for free on Wattpad, where YA rules all like the One Ring.

I’ve got two giveaways for free stuff going on right now! Get a FREE paperback copy of Wolf of the Tesseract over at my Goodreads contest. Also, you can get your FREE audiobook copy of Dekker’s Dozen: The Last Watchmen at my facebook author page! 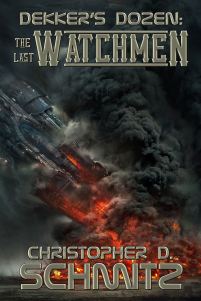 If you want a free story right now, check out the piece below!

Burning the God of Thunder is available here: https://freeditorial.com/en/books/burning-the-god-of-thunder

“God owes me a 1936 Harley Davidson Knucklehead!” It’s what drives Burn–Bernard Crowley. With that one statement, he can easily justify every evil act he’s ever committed as he’s crisscrossed the country on two roaring wheels. While heading west through New Mexico, his mirror showed a mammoth of a man riding an old Ironhead and coming up fast. Shirtless, tan, and blonde, Burn mentally identified him as Thor, at least until they could pull off for gas or a drink at some biker dive. He might not have been the son of a god, but the tall blonde claimed to be a guardian angel on a critical mission–one in which Burn played an important role and forces the jaded biker to confront his past demons.